Two new airport displays focus on the importance of chess in Lubbock. 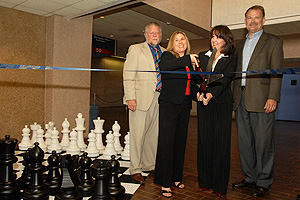 In the past year, Lubbock and Texas Tech University have embraced chess like no other community in the U.S.

Two large-scale chess sets located on the east and west wings of the terminal, now provide entertainment for travelers while a plaque, posters and other information promote SPICE and chess activities in Lubbock.

Lubbock and Texas Tech were named co-city and co-university of the year, respectively, by the U.S. Chess Federation.

“Susan Polgar and the SPICE program have opened the door to a world that not only enhances the university’s profile, but has increased Lubbock’s exposure to international tourists,” said Marcy Jarrett, executive director of Visit Lubbock.

SPICE hosts a number of invitational and open tournaments throughout the year for everyone from enthusiasts to international champions.

The 2008 SPICE Cup was the highest rated tournament of its kind ever held on U.S. soil and featured players from countries including Iceland, India and Russia; the Susan Polgar National Invitational for Girls brought female chess players from nearly every U.S. state to Lubbock for competition.