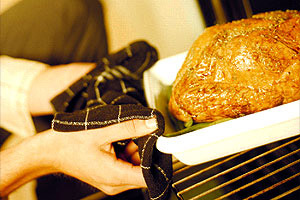 While the masterful chefs of the highly-popular Food Network cook up plenty of finger-licking-good food, a new Texas Tech University study on food safety measures suggests that it’s not a good idea for some of their stars to actually lick their fingers while cooking the grub.

These days fewer Americans learn how to cook during childhood or high school. High schools have scaled back on offering consumer science or what was traditionally known as home economics.

“Many people learn how to cook by watching these highly popular and entertaining cooking shows,” said Erica Irlbeck, an instructor in the Department of Agricultural Education and Communications.

Last year researchers set out to determine the scope of the televised food safety problem by studying Food Networks’ heavy hitters: “30 Minute Meals with Rachael Ray,” “The Essence of Emeril,” “Everyday Italian,” ”Paula’s Home Cooking” and “Semi Homemade Cooking with Sandra Lee.” The Food Network is distributed to more than 85 million households in the United States and is considered the giant in food programming, ranked number one out of 50 cable channels.

Negative behaviors included food from unsafe sources, failure to use a thermometer, use of food from the floor, failure to refrigerate perishables, failure to wash fruits or vegetables, inadequately washing equipment, sampling food or licking fingers, cross contamination of ready-to-eat or raw foods, and touching the face.

The results weren’t exactly savory with 118 positive food safety measures and 460 poor food handling incidents. Among the most noticeable culprits were not washing fruits, vegetables and herbs properly and a lack of hand washing in general.

“These are important behaviors because if they are not followed, you can become ill,” said Mindy Brashears, associate professor and director of the International Center for Food Industry Excellence at Texas Tech. “Many food borne illnesses can be prevented by proper food handling and that’s why it’s important these popular stars follow good food safety practices.”

Picking Up the Tab

“We realize these are time-limited entertainment programs and not documentaries, but some food safety behaviors could be better incorporated,” said Cindy Akers, associate professor and director of the College of Agricultural Sciences and Natural Resources Student Services Center.

“For example, at the end of a segment the host could say, ‘We’re going to take a break now, and I’m going to wash my hands. You should always wash your hands after handling raw meat.’ Another way to boost food safety would be to add post-production pop-up graphics containing pertinent safety information,” Akers said.

For the record, "30 Minute Meals" and “Semi-Homemade Cooking with Sandra Lee” virtually tied for having the most positive behaviors at the time the programs were aired last year. The worst was “Paula’s Home Cooking,” in part for her affinity for licking her fingers more than 20 times while preparing her down-home favorites. On the other hand, Paula Deen demonstrated sampling food properly more than any of the others.

The researchers noted that they were frequently asked ‘who was the safest or least-safe host on the Food Network.’ Their response, there’s not really a fair way to name one person as best or worst. For example, one show had the most positive observations, yet it also had the second-highest negatives.

Cindy Akers is an associate professor in the Department of Agricultural Education & Communications and director of CASNR's Student Services Center.