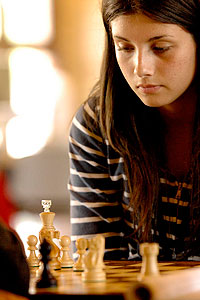 Texas Tech will host the 2008 SPICE Cup Sept. 19-28, the highest-rated tournament of its kind in U.S. history.

For chess players all over the world, Texas Tech University is now the perfect destination for success.

The U.S. Chess Federation named Texas Tech Co-Chess College of the Year (with the University of Texas at Dallas), and Hal Karlsson, professor of geosciences, received the Special Service award for his dedication to the Susan Polgar Institute for Chess Excellence (SPICE). Lubbock also was named Co-Chess City of the Year (with Tulsa, Okla.).

“Texas Tech hired Susan Polgar and Paul Truong and made SPICE a formal institution,” he said. “This went way beyond what any other school has done and shows tremendous dedication to chess.”

Truong, director of marketing and public relations for SPICE, said that due to the creation of SPICE, Lubbock and Texas Tech are now known as one of the major centers of chess in the world.

“As of a year ago, chess was not noticeable in West Texas,” he said. “A year later, SPICE and Texas Tech are about to host the 2008 Spice Cup (Sept. 19-28), the highest rated 10-player round robin international tournament in U.S. history. It is like bringing Wimbledon or the Masters to town.”

The USCF cites the accomplishments of Texas Tech for creating SPICE, setting up a chess program and running rated tournaments both on and off campus. Both the university and the city were instrumental in supporting those events.

“This brings incredible recognition to SPICE and Texas Tech,” Truong said. “We are now known nationwide and internationally as a major force to be reckoned with. Chess players want to compete in Lubbock and potential students want to come here to study.”

Truong believes the institute will raise more funding and financial support to recruit the brightest young talents worldwide, an accomplishment already underway with the addition of Texas Tech student and International Chess Master Gergely Antal from Hungary. He also believes the institute can play a major role in Chancellor Kent Hance’s goal to increase enrollment to 40,000 students.

Truong said that Karlsson is the vision of hard work and persistence combined with honesty, integrity and loyalty.

“He truly deserves this recognition," said Truong. "Without him, SPICE would not exist today. He loves chess and he knew long ago what this sport could bring to Texas Tech and West Texas.”

Hal Karlsson is an associate professor of geosciences in the College of Arts and Sciences. He also is faculty advisor to the Knight Raiders Chess Club.