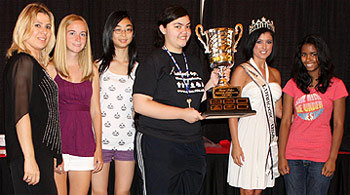 Ashley Carter (2nd from left), who will be attending Texas Tech to play chess, tournament winner Courtney Jamison (center) and other finalists, pose with Susan Polgar at the invitational.

In chess, as is so often the case in life, the queen is the most formidable piece on the table. She glides or stomps across the board at will, in straight charges or cutting diagonals, more nimble and much more domineering than her short-legged spouse, whose role is limited to sidestepping attacks. Yet as few as two decades ago, the chess world didn’t treat women players with the same regard. An example: in 1986, Susan Polgar was the first woman in history to qualify for the World Chess Championship, but was barred from the competition because of her gender. Polgar shattered that ceiling, eventually becoming the first female grandmaster, and opened the door for other women to compete on equal footing. This point could best be illustrated by the 5th Annual Susan Polgar National Invitational for Girls that took place July 27-Aug. 1 at Texas Tech. The tournament pitted 52 girls – some of the nation’s most dominant under the age of 19 – against each other in the tournament’s largest pool to date. “It is heartwarming and very special to see such an excitement in these girls for the game of chess,” said Polgar, director of Texas Tech’s Susan Polgar Institute for Chess Excellence (SPICE). “I created this tournament to provide a venue for aspiring female chess players to compete against each other.”

The future femme phenoms – one a mere six years old – gathered in the Frazier Alumni Pavilion off the Drive of Champions to test their mettle through six grueling days of play. These 18-and-under participants beat out thousands of girls who compete annually in chess events across the world for the honor of representing their state in the prestigious tournament. Courtney Jamison, representing Texas, walked away the winner. Claiming second: Ashley Carter of Michigan, a recent high school graduate who will attend Texas Tech to participate in the Knight Raiders chess club. Carter, who has played chess for more than 10 years, has competed in all five of Polgar’s invitational tournaments and said Texas Tech’s chess program attracted her to the university. “I think Texas Tech will be a good place for me,” Carter said. “I have always wanted to attend a chess school.”

Recruiting students like Carter is, of course, one of the main goals of establishing SPICE and hiring a player of Polgar’s magnitude to lead Texas Tech’s burgeoning chess efforts. In the past, Polgar hosted the girls’ tournament in locations such as Florida, Arizona and New Jersey. Now Texas Tech will host the event for the next ten years. This means the nation’s elite female players will gather in Lubbock each year for a week on campus, bonding with peers from around the country on an extended tour of the university and city. “There were players in this year’s event from almost every state, which is part of what makes it such a great tournament- you get to meet girls from around the country,” Jamison said. And the tournament just keeps growing. “The tournament has become a tradition,” Polgar said. “The girls are excited about it and there is a lot of word-of-mouth advertising for Texas Tech as girls go home and discuss the tournament with their friends.” Carter was impressed. “It’s a very pretty campus,” she said.