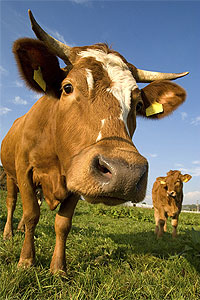 Researchers believe integrating forage production and/or grazing with crop production could improve water conservation due to the water-use efficiencies of forage.

Here’s a suggestion for South Plains producers looking to turn a profit while preserving Ogallala Aquifer water: Put the cattle out to pasture. After three growing seasons, researchers with the Texas Alliance for Water Conservation (TAWC) have found that for growers looking to curtail their irrigation, grazing cattle on forage land could be the most profitable use of acreage. TAWC is an eight-year, $6.2 million demonstration project monitoring 26 Floyd and Hale County producers who use a variety of crop and livestock grazing combinations. By monitoring their farms over eight years, researchers hope to pinpoint growing practices and technologies that can allow growers to continue turning a profit on their land while at the same time preserving diminishing South Plains water resources. “You can take other crops and make them profitable per acre, but when you look at the yield per unit of water investment, you get a different picture. Out here, water is a scarce resource, so we have to look at things in terms of water cost,” said Vivien Allen. While researchers stress it is still too early in the demonstration and that the systems under study are too complicated to draw too many conclusions as of yet, there are some intriguing trends. Among them: Through the 26 test sites, TAWC partners are examining multiple commodities under different management techniques. The project documents local producers who make their own decisions on cropping and livestock practices in a variety of dryland and irrigated systems that include cotton, corn, sorghum and small grains. Researchers cautioned in their summary that profitability should be balanced against the long-term ability to sustain resources. The Ogallala Aquifer, which supplies most irrigation water for the region, is not replenishing as quickly as it is being used. “Sustainable profits may differ greatly from maximum profits that are achieved with non-sustainable depletion of natural resources,” they noted.

Vivian Allen is a Thornton Distinguished Professor and Horn Professor of Forages in the Department of Plant and Soil Science in the College of Agricultural Sciences and Natural Resources.

Saving the Southwest from Salt Cedars