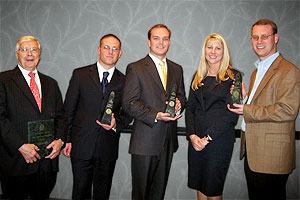 From left to right: Coach Don Hunt; Charles Pelowski (2L) (Bailiff); Graigory Fancher ('08); Erin Welch ('08); Director of Advocacy Programs Rob Sherwin.
The School of Law Appellate Advocacy Team won the State Moot Court Competition Championship at the Texas State Bar Convention in Houston, held June 24-26. In his last competition as coach of the appellate team, retiring coach Don Hunt added to his legacy by coaching the team to the win in what is otherwise known as the Texas Law School Super Bowl. Hunt taught appellate advocacy at Texas Tech from 1974-2004, after which he limited his involvement to coaching the national appellate advocacy teams. He also was coach of the national trial teams for 30 years. Walter Huffman, dean of the School of Law, fielded exceptional comments from the competition’s judges. “The final round in the competition is traditionally judged by the justices of the Texas Supreme Court,” Huffman said. “They told me afterward they have never seen a more intense and well-argued final round supported by outstanding written briefs on both sides. It goes without saying that our talented team delivered an extraordinary performance under extraordinary pressure.” The winning team was made up of Graigory Fancher of Idalou, and Erin Welch, of Alvarado, both May 2008 graduates; Matthew Luensmann, a third-year student from Saint Hedwig; and Charles Pelowski, a second-year student from Abilene. “The entire Texas Tech law family joins me in extending congratulations to our Moot Court team members for representing themselves and Texas Tech Law so extremely well in this important and prestigious competition,” Huffman said, “and especially for presenting Coach Hunt with a storybook ending to his magnificent career.” Story produced by the Office of Communications and Marketing, (806) 742-2136.