Researchers predict California's flora will collapse over next century due to climate change. 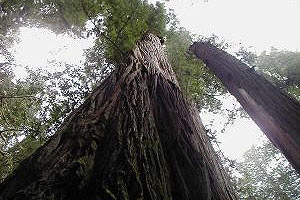 The imposing Coast Redwood tree is one of California's more than 5,000 plant species researchers believe could be threatened with extinction due to climate change.

Two-thirds of the plants native to the state of California could suffer more than an 80 percent reduction in geographic range by the end of the century, according to a recent study. Climate scientist Katharine Hayhoe, who contributed to the Nobel Prize-winning United Nations Intergovernmental Panel on Climate Change, prepared high-resolution projections for California’s future climate for an ecological study by researchers at the University of California, Berkeley, and Duke University. Their results will be published June 25 in the journal PLoS ONE. The study tracked 5,500 native plants of California, including the renowned Coast Redwood tree, and predicted how changing climate conditions could affect their dispersal throughout the region. Hayhoe said the climate change likely will push these plants farther north or to higher elevations, in many cases reducing the range size or even causing extinctions. “The bad news is that the climate change we may experience in the future could have this kind of drastic impact on California’s native plant species,” Hayhoe said. “Many species may have to move to cooler areas in order to survive. In some of these cases, for example, when a plant grows near the top of a mountain, there’s nowhere to go. “But there is some good news. We can use this information to find out where we can set aside land for conservation purposes now, so these plants can be preserved.”

Because endemic species – native species not found outside the state – make up nearly half of all California's native plants, a changing climate will have a major impact on the state's unparalleled plant diversity, the researchers warn. “Our study projects that climate change will profoundly impact the future of the native flora in California,” said David Ackerly, a professor of integrative biology at University of California, Berkeley. “The magnitude and speed of climate change today is greater than during past glacial periods, and plants are in danger of getting killed off before they can adjust their distributions to keep pace.” The researchers caution that their study can't reliably predict the fate of specific species. However, the trend is clear: the researchers believe that in response to rising temperatures and altered rainfall, many plants could move northward and toward the coast, following the shifts in their preferred climate, while others, primarily in the southern part of the state and in Baja California, may move up mountains into cool but highly vulnerable refugia – places where large numbers of plants hit hardest by climate change are projected to survive. Coast Redwoods may range farther north, for example, while California oaks could disappear from central California in favor of cooler weather in the Klamath Mountains along the California-Oregon border. 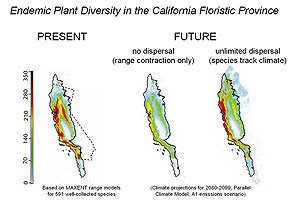 Nearly half of California's native plant species are found nowhere else in the world. Researchers warn that up to 66 percent of those species could experience drastic reduction over the next century. Click to Enlarge.

Many plants may no longer be able to survive in the northern Sierra Nevada or in the Los Angeles basin, while plants of northern Baja California will migrate north into the San Diego Mountains. The Central Valley will become preferred habitat for plants of the Sonoran Desert. “Across the flora, there will be winners and losers,” said first author Scott Loarie, a doctoral candidate at Duke University’s Nicholas School for the Environment who has worked with Ackerly and Hayhoe on the analysis for the past four years. “In nearly every scenario we explored, biodiversity suffers – especially if the flora can't disperse fast enough to keep pace with climate change.”

The authors identified several “climate-change refugia” scattered around the state. Many are in the foothills of coastal mountains such as the Santa Lucia Mountains along California's Central Coast, the Transverse Ranges separating the Central Valley from Los Angeles and the San Gabriel Mountains east of Los Angeles. Many face pressure from encroaching development. “There's a real potential for sheltering a large portion of the flora in these refugia if they are kept wild and if plants can reach them in time,” Loarie said. The authors argue that it’s not too early to prepare for this eventuality by protecting corridors through which plants can move to such refugia, and maybe even assisting plants in reestablishing themselves in new regions. “Part of me can't believe that California's flora will collapse over a period of 100 years," Ackerly said. "It's hard to comprehend the potential impacts of climate change. We haven't seen such drastic changes in the last 200 years of human history, since we have been cataloguing species.” Story produced by the Office of Communications and Marketing, (806) 742-2136. Katharine Hayhoe photo courtesy Artie Limmer. Web layout by Kristina Woods Butler.