From Monahans to Mission Control 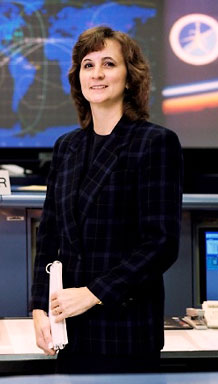 Her education at Texas Tech gave Sally Davis the technical skills and ability to work in teams that has fueled her success at NASA. Click to enlarge.

When Sally Davis entered Texas Tech University in 1976 it was a huge, scary step for a girl from the small West Texas town of Monahans.

“Lubbock was a really big city to me,” she said.

But this small town girl has come a long way. When the Space Shuttle Atlantis docked with the International Space Station in February, Davis was the woman in charge in Mission Control when astronauts deployed the Columbus Laboratory.

“The mission went extremely well, there are a few folks in the European Space Agency Columbus Program who have been working to get the Columbus Laboratory in orbit and attached to the space station for about 20 years,” she said.

The laboratory, built by the European Space Agency, gives those on the space station the room and equipment to conduct science experiments ranging from life science to earth observation work.

“We went through years of preparation and practice,” said Davis. “As with any time you install new hardware, I expected that we’d have more problems. But everything went very well, we got almost everything done we had hoped.”

While delivering the Columbus was the point of the mission, Davis believes something much more subtle happened during the mission. The astronauts were performing space walks, doing science research, exercising and generally going about a number of different jobs all at the same time.

Davis said the observations of crew member Dan Tani really brought the point home to her. He said, “It was almost like something out of an old science fiction movie with everyone going about their lives and business. We’ve been a long time getting to that point. Up until now we’ve either focused entirely on assembly when the shuttle is at the space station or day-to-day operations when the shuttle isn’t there. This was an indication of just how diverse and mature the space station has become that we can now do several things simultaneously.” 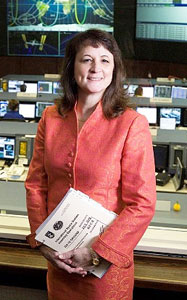 Davis has served in a variety of roles at NASA, most recently as shuttle safety manager.
Click to enlarge.

Davis graduated from Texas Tech in 1980 with a degree in mathematics. She initially wanted to study computers, but Texas Tech didn’t have a computer major then, just a minor.

She credits her education with giving her the foundation, the ability to work with people in teams and the technical skills she’s needed to succeed.

“I had a lot of fun at Texas Tech and I did a lot of growing up,” said Davis. “I probably didn’t make as good a grades as I was capable of, but it was a good experience.”

She fondly remembers living in Gates Hall, going to football games and looking on with wonder at the Carol of Lights.

“I’m really happy to be an alumna of Texas Tech. I’m glad I followed my sister there – even if it didn’t make all the Aggies in my family too happy,” she said.

From Texas Tech to NASA

When she graduated in 1980, she went to work for a company that had a contract with NASA. In 1989, she moved from the private sector and joined the space agency.

She never wanted to fly. “I don’t have the temperament for that. I like to tell people what to do from the ground.”

Davis has had many roles with NASA. She’s been a Russian Interface Officer responsible for coordinating communications between mission control and the Russian mission control center near Moscow. That job took her to Russia several times. She’s worked as a flight design manager, putting together the trajectory information required to do a flight, and she’s been a Flight Director for the International Space Station from 1996 through earlier this year.

Now there’s a new challenge for the Red Raider. Davis has moved from Mission Control to the shuttle program office where she’s a shuttle safety manager.

“It’s kind of a bitter sweet change for me. I’ll miss the people I’ve worked with for so many years, but this is a new challenge,” she said. “I’m learning how all the facets of what we do come together, how ground operations work together. I’ll get to spend some time at other space centers now, rather than in Houston in Mission Control.” 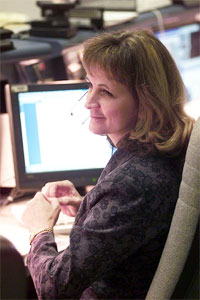 The journey has brought Davis to the forefront of space exploration and has taught her the importance of global cooperation.

You can’t miss the enthusiasm when Davis talks about her job – and space.

“I guess working for NASA was always a childhood dream,” she said. “I think almost everyone who works here feels like that. They grew up with space flight. When you think about what we’re doing here, it’s amazing. We’re flying people and hardware in space. It’s an important thing to do as a country and internationally with our partners.”

It doesn’t take much to get Davis to become philosophical about her job and space. While she’s glad that space flight has become part of our everyday life, she doesn’t want people to take the space program for granted. She believes the Atlantis mission is a good example of how multilayered space flight is.

“Each mission is about achieving a goal that people may have been working for decades to achieve,” she said. “But space missions are also about many people around the world working together. People from different cultures, who maybe were at war 50 years ago, are now working cooperatively.”

It’s not that far geographically from Monahans to Mission Control, but Davis is still amazed by the journey.

“I feel so fortunate to be part of the space program,” she said. “This small town girl never expected to part of something like this. I will always relish the thought of what I’ve done and the memories of doing it. It is a once in a life time opportunity.”