From the dust of a new campus sprouted a Texas Tech tradition with a green thumb and an eye for beauty. 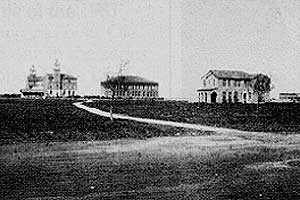 Texas Technological College consisted of a few widely spaced buildings on a barren landscape before the Arbor Day tradition took off in the 1930s. Photo courtesy of Southwest Collection.

After a decade of Dust Bowl winds whipping across the South Plains, Texas Technological College sat starkly, void of trees, shrubs and flowers. A professor of horticulture at the college looked across the barren campus in 1938 and an idea sparked.

After bringing his idea to then-President Bradford Knapp, O.B. Howell enlisted the help of his advanced students in horticulture and the Arbor Day tradition took root.

The college's first Arbor Day on March 2, 1938, started the enthusiastic attention to campus beautification still alive today. Decked in long dresses and sunbonnets, home economics students – all females at the time – delivered coffee and doughnuts to faculty, staff and more than 1,000 members of student organizations working to spruce up the landscape. A noon dismissal of classes left no shortage of help.

With important players like Knapp, State Senator G.H. Nelson and business manager W.T. Gaston supervising from horseback, 5,000 shrubs, hedges and 50 varieties of trees – all from the college’s nursery – began to dot the campus.

The tradition thrived for 10 years. Students from the speech department adopted a plot of land they named the Forest of Arden, the setting for Shakespeare’s play “As You Like It,” to plant and nurture. They entertained audiences with a play each Arbor Day in the “forest,” located where the Student Union and Music Buildings stand today.

When Dossie M. Wiggins took the office of president in 1948, it was the beginning of Texas Tech’s most prosperous years. With enrollment at an all-time high of 6,750 and more money in the treasury, Wiggins’ new administration began an expansion program focused on beautifying the campus: mending old buildings, constructing new ones, paving parking lots, laying sidewalks and, of course, landscaping the campus.

Shortly after the expansion program began, the college switched from well water to city water, and the supply, limited only by what the college could pay, made the campus vegetation come alive. Footpaths became sidewalks and what was, for the time, a sophisticated sprinkler system boosted the campus into the progressive likes of more well-known universities in the northeast. The Arbor Day tradition faded away along with the need for students working hard to make the campus green. 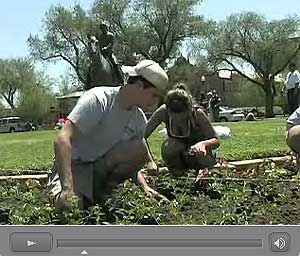 Arbor Day at Texas Tech, revived in 1999, is a continuing tradition for students. In 2007, participants planted tall fountain grasses around the newly installed lights on Memorial Circle. Watch

A New Shade of Green

Half a century passed before Debbie Montford, Chancellor John Montford’s wife and chairwoman of the Campus Caregivers, revived the campus’ green spirit in 1999. The Campus Caregivers organized a ceremony honoring Virginia Knapp, daughter of President Knapp. The group planted trees outside the Administration Building and the Health Sciences Center.

Since then, the tradition has evolved into an annual campus-wide event. The Texas Tech Activities Board, part of the Student Union & Activities, will host events this year from 11 a.m. to 3 p.m., April 25, around Memorial Circle. Participants with a Texas Tech student ID can take advantage of free food and a free t-shirt. Participants also will hear live music by Fort Pastor, a band from Orlando, followed by an awards ceremony honoring student organizations. The day will wrap up with participating student organizations planting flowers and ground cover in plots marked for their group. The planting will take students, faculty and staff just two hours, much less than the time Grounds Maintenance Department could plant the nearly 25,000 plants.

Debbie Montford’s dream of beautifying the campus, and O.B. Howell’s dream before hers, have inspired a budding tradition at Texas Tech that will continue to make the campus a beauty spot on the South Plains for years to come.