Funding will establish a first-class research team in the area of nanophotonics technology, placing Texas Tech at the head of the pack in the promising field. 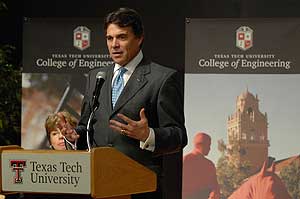 Gov. Rick Perry was on hand to announce the funding that will attract a team of world-class nanophotonics researchers.
The College of Engineering has received a $9 million package – $2 million from the Texas Emerging Technology Fund (TETF), $5.35 million from AT&T and a $2 million commitment from the university – to attract a team of world-class faculty researchers in the field of nanophotonics. These researchers will be part of the university’s Nano Tech Center, co-directed by Henryk Temkin and Mark Holtz. The collaborative funding will be used to enhance nanophotonics research, and supports the development of new technologies, including those that will impact tomorrow’s communications industry. “Continuing excellence in research is one of the strategic aims of the Texas Tech University System,” said Chancellor Kent Hance. “The funding received from the TETF and the gift received from AT&T firmly establishes Texas Tech as an innovator in nanophotonics, enabling the university to educate students in the critical areas of computer and electrical engineering.” “The Emerging Technology Fund continues to draw the brightest minds in research and innovation to our state, spurring the commercialization of university research, and ultimately positioning Texas as a strong competitor in the global marketplace,” said Gov. Perry. “Continued expansion of our research and development capabilities will create more jobs and generate substantial capital investments, further diversifying and enriching our economy.” The $5.35 million from AT&T will establish two endowed chairs, the Edward E. Whitacre, Jr. Chair in Electrical and Computer Engineering and the Linda F. Whitacre Chair in Electrical and Computer Engineering. The positions will be filled by Hongxing Jiang and Jingyu Lin, respectively, currently professors at Kansas State University. The contribution will also create the Edward E. Whitacre Jr. Endowed Scholarship, to recruit outstanding undergraduate and graduate students to major in engineering. Recipients will be chosen based on achievement in academics and leadership. Finally, a portion of the AT&T funds will be used to expand the engineering school’s nanophotonics lab and purchase equipment. 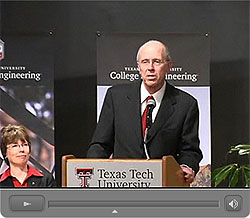 Watch as Chancellor Kent Hance, Dean Pamela Eibeck and Governor Rick Perry speak about the new nanophotonics initiative.
Additionally, Jiang and Lin, who will arrive in May, will move the headquarters of their corporation, III-N Technology Inc., to Lubbock. The third member of the research team, Zhaoyang Fan, arrived in January. Lin and Jiang have collaborated on research for more than 20 years, developing products in solid-state lighting, biological and chemical agent sensing and the harvesting of energy. These researchers have more than 185 publications, eight U.S. patents, 14 patents pending and receive an average of $1.5 million in competitive funding annually related to the study of nanophotonic devices. III-N Technology Inc. was founded in 2001 to commercialize the research team’s innovations, including light-emitting diode (LED)-based residential and commercial lighting products that can be plugged directly into standard power outlets. “This research provides immeasurable benefits to our state and nation, and the funding provides tremendous opportunities for the students and faculty,” said John Montford, AT&T Senior Vice President-Western Region Legislative and Regulatory Affairs. “We’re pleased to be a part of this unprecedented announcement for the College of Engineering, and we look forward to continuing our deep commitment to this city and this great University.” At Gov. Perry’s request, the TETF was established by the Texas Legislature in 2005 to enhance the research and commercialization of emerging technologies in Texas. TETF will help Texas Tech establish a first-class research team in the highly competitive area of nanoscale opto-electronics. Opto-electronics is the science and engineering of converting light energy into electrical energy, and vice versa. Holtz said the Texas Tech research will lead to “new discoveries which will find immediate use in miniature, efficient and bright light sources, as well as extremely sensitive light detectors.” Each of these has applications that are important to the nation’s wellbeing and the state’s economic development in the high tech area. “Texas Tech already conducts groundbreaking research in nanoscale opto-electronic materials,” said Dr. Pamela Eibeck, dean of the College of Engineering. “Yet, bringing on these new professors and their research teams, and dramatically growing our university capabilities through the combined efforts of the TETF, AT&T and the university, will firmly place us at the head of the pack in this promising field.” Story produced by the Office of Communications and Marketing, (806) 742-2136.

Nanophotonics involves the creation and manipulation of advanced materials at the nanoscale, or one-billionth of a meter, that can produce and sense light.

Nanophotonics research will transform lighting for homes and businesses. Light bulbs will soon be replaced with new solid-state lighting which will be smaller, brighter, and will use a fraction of the energy of existing light bulbs.

In the future, the Internet will become even faster and computers will be more powerful by integrating nanophotonic devices into computer chips. Future home televisions could be as large as your living room wall but as thin as a credit card.

Nanophotonics research will make our nation safer through attack prevention and detection with space-based missile defense systems. In laboratories or in the battlefield, nanophotonic sensors will detect very small quantities of dangerous biohazards such as anthrax, smallpox and plague.