Texas Tech professors join the international search for the Rosetta Stone of physics. 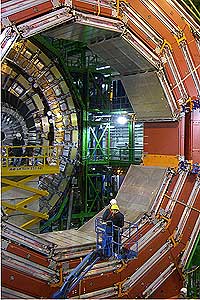 Assembly of the Muon Solenoid structure at CERN. The silver slab is being moved toward the ring with a crane.
Outside Geneva, some 300 feet below the Jura Mountains and protected from the effect of cosmic rays, a phalanx of more than 2,000 international scientists prepare to fire up the world’s largest particle collider to probe the bounds of mass and matter and answer some of the universe’s most mind-blowing riddles. The hunt is on for new particles and phenomena in physics, said Nural Akchurin, chairman of the Department of Physics and a project manager at the European Organization for Nuclear Research, known as CERN. High on the list is the Higgs boson. It’s responsible for giving mass to subatomic particles, which make up atoms and so-on until you have a pencil, a rock or a Chrysler. Simply put – but perhaps too simply – these scientists hope the $8 billion Large Hadron Collider and Compact Muon Solenoid will prove the existence of matter’s smallest building blocks when the switch gets flipped Oct. 21. Akchurin and three other Texas Tech professors are responsible for building the calorimeters – the catcher’s mitts – they hope will contribute to these historic discoveries of phenomena that will usher in a new age of physics. Barely cracking the spine of this “new physics” brand of particle science can overwhelm the average Joe. For instance, some theories suggest there are actually 11 dimensions instead of four. Another says we live in a multiverse instead of a universe. Isaac Asimov or H.G. Wells contrived such ideas in fiction. But many physicists believe these theories are halfway proven already, Akchurin said. Their proof may come after the conclusion of the experiments at CERN.

Scientists hope to prove many theories with the experiments next summer. But perhaps the most important seeks to prove or disprove the existence of a particle called a Higgs boson – a theoretical particle in a barely perceptible dimension that some refer to as the "god" particle. And if it exists, does Higgs give the subatomic points their mass by holding the void of space together in strands of energy? “In the most vanilla version of the Higgs theory,” he said, “You need some mechanism through which you give mass to electrons and protons. Finding that mechanism could close the loop in assigning known masses. If you have Higgs, you can explain everything – or nearly most things.” If true, science could finally explain what makes something have mass – what makes a table a table and a chair a chair. “This is much bigger than the atom bomb,” Akchurin said. “If this project finds nothing but Higgs, that’s huge. If this experiment finds nothing at all, I think that’s equally as big a deal because we’ll have to rethink all these other theories. Whatever comes out of this will be interesting.”

Here’s the plan: Scientists will accelerate opposing beams of protons to near the speed of light in the 17-mile, circular Large Hadron Collider. As these protons are shot around the circular tunnel, the Compact Muon Solenoid will catch what happens when these protons crash into each other. Somewhere in the melee of these particles’ high-energy collisions, the researchers hope to create fractions of fractions of fractions of subatomic particles and see if the elusive Higgs decides to show its face. And Sung-Won Lee, an assistant professor of Physics at Texas Tech University, will watch the calorimeters and hope to catch Higgs and other theoretical particles. As it stands, he said, Texas Tech’s equipment is ready for final dress rehearsal and opening night. “We are ready to go,” Lee said. “Currently we are testing our calorimeter system again and again until the Large Hadron Collider starts operating in 2008. We don’t want our detector to have any problems before it starts collecting real data. Our detector will serve as a unique tool that will help us answer some of the most profound questions about the universe.” Igor Volobouev, also a physics professor at Texas Tech, said he is the most recent member to join the university’s presence at CERN. His most recent work there involves understanding the behavior of elementary particles from the spatial energy patterns created by the particles in the calorimeters of the experiment. He felt certain that Higgs and other theoretical particles will make an appearance and confirm the Standard Model. “This will be a triumph for the theory -- the Standard Model of particle interactions,” Volobouev said. “At this point the theory is so well established that everybody in our field expects the Higgs particle to be there. Not finding it where it is expected would actually be much more surprising. “Imagine that the planet Neptune is not seen anywhere near its predicted location -- that would generate some buzz.” Whatever should arise from the experiment’s result, Akchurin said, mankind will have a greater understanding of the way the universe or multiverse works – at least the five percent we can see. “Every time we have done particle experiments, we have learned something new,” Akchurin said. “If God is fair, hopefully it will happen again.”

Nural Akchurin, chairman of the Department of Physics at Texas Tech University can be reached at (806) 742-3767 or Nural.Akchurin@ttu.edu

Igor Volobouev, assistant professor of physics at Texas Tech University can be reached at (806) 742-4752 or I.Volobouev@ttu.edu

Sung-Won Lee, assistant professor of physics at Texas Tech University can be reached at (806) 742-3730 or slee@highenergy.phys.ttu.edu

The Department of Physics at Texas Tech is active in a broad range of research and teaching activities designed to prepare undergraduates for challenging careers in science and technology.

Story produced by the Office of Communications and Marketing, 806- 742-2136.
Web layout by Kristina Butler