You don’t need a degree to practice some forms of therapy at Texas Tech. You just need four legs, a long nose and a tail. 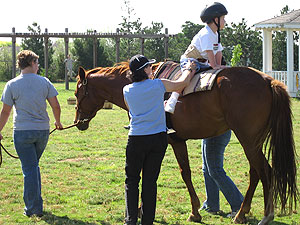 Even children with severe physical disabilities such as spina bifada are able to improve balance and gain strength through hippotherapy.

Heather Hernandez smiles as she looks out across the field at the little girl riding a pony. Before she started riding, the girl didn’t have the strength or coordination to sit up straight in a saddle.

Now after several semesters of hippotherapy at the Texas Tech University Therapeutic Riding Center, she can sit up on her pony, has the strength to ride for the entire hour session and is even verbalizing what she wants the horse to do.

This success story isn’t unique – the hippotherapy classes held here have helped many children and adults build physical strength, coordination and balance, as well as speech and occupational skills.

Hippotherapy – which has nothing to do with the corpulent, water-dwelling creature that shares the first part of its name – is physical, speech or occupational therapy conducted on horseback. Hippos is the Greek word for horse. 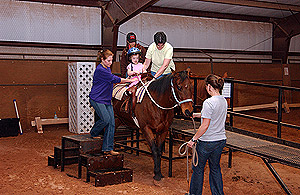 Sessions are held in the indoor arena on rainy days. Sensory tools, such as hard planks that click when the horse walks over them, are used to heighten awareness. Photo by Bill Marcy.

“The movement input into the body is the same as human movement,” Hernandez said from a grassy spot overlooking the session. “The riders feel the movement of the horse and they start to mimic that movement in their own bodies even when they aren’t on the horse. They also help strengthen their muscles by holding on to the horse.”

Riders can sit in different positions on the horse to get different types of movement. For example, riding correctly in the saddle will create a front-to-back motion. Sitting sideways in the saddle will produce a side-to-side swing. Feeling these different motions helps riders learn balance and coordination.

“One little boy had spina bifida, so he walked with arm braces,” Hernandez said. “They put him on a horse and two weeks later, he was walking without his crutches. At the Christmas party that year, he slowly walked from table to table without his crutches to show everyone how much he’d improved.” 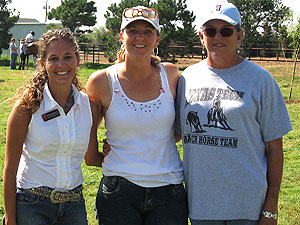 Therapists also use hippotherapy for speech and occupational therapy.

“Horses are good motivators,” Hernandez said. “You have to verbalize ‘walk on.’ It’s a good confidence booster because the kids can make this 1,000-pound animal do what they say. And a horse will see them as they are, without judging them.”

Olivia Whitefield, the speech therapist at the center, said riding builds coordination in the facial muscles, which helps the students with their speech.

“We have the kids ride with their hands down, leaning on their hands with their elbows on the horse or even laying down on the horse,” she said. “With your face on the horse, your tongue, lips, jaw – everything has to coordinate together with the motion. This helps build awareness of the muscles in your face.

“Also, riding helps with general physical endurance. It helps with posture and respiration. You can’t talk if you are out of breath.”

Hippotherapy also helps the riders with occupational needs, such has how to take care of things and how to accept touch from others, said Kaki Goodwyn, the physical therapist at the center.

“They groom the horses, put on the horses' tack and everything,” Goodwyn said. “They want to touch the horses and play with them, so they accept the responsibilities better and it helps desensitize them to touching. They also do functional activities like taking their riding belt off and putting their helmets away. It teaches them how to take care of themselves. It doesn't seem like real therapy because it's fun.”

Where it All Happens

The University Therapeutic Riding Center is located at the Texas Tech Equestrian Center, donated to the university by Sue and Curtis Griffith in 2004. The center focuses on the treatment needs of children with disabilities, while training college students for careers and occupations in the equine field. But what makes the equestrian center unique is all of the activities it offers, said Director Kim Guay.

“We’ve made a lot of changes over the last couple of years to make it student friendly,” Guay said. “We have a rodeo program, a ranch horse team, an equestrian team, classes in horsemanship and horse judging and we board private horses. We’re also the premier accredited center – the only center here in Lubbock – with accreditation from NARHA (North American Riding for the Handicapped Association).”

The center is very popular in the Lubbock community, said Hernandez.

“Parents always come back, even if the student has a bad day,” Hernandez said. “Whole families will come out to watch. It involves volunteers, staff, students and even the community. It’s great to see people involved together in such a great program.”

The Therapeutic Riding Center would not be successful without the support and help of its many volunteers.

Students and faculty from the Texas Tech campus as well as members from the Lubbock community support the programs at the Equestrian Center with their time and effort and also with their financial support.

More than a course

For students in the program, it's not just a course in equine therapy or even a service learning opportunity, they receive other benefits as well.

According to a recent study, students had a greater understanding about disabilities, a better understanding of what families with disabled children face and felt they had changed as a result of the course.

Read the full study - an article published in the North American Colleges and Teachers of Agriculture (NACTA) journal.

Not Just Horsin' Around | Video

Story produced by the Office of Communications and Marketing, 806-742-2136.
Web Layout by Gretchen Pressley