Texas Tech University researcher and others publish new analysis to encourage policy change before it is too late. 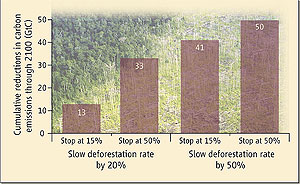 A chart illustrates how reducing deforestation in developing countries could contribute to the global emission targets required to stabilize atmospheric levels of carbon dioxide. Click to enlarge.
Industrial nations may want to work with developing nations to slow and eventually stop deforestation to stabilize greenhouse gas levels in the atmosphere, according to a Texas Tech researcher. Tropical deforestation currently accounts for nearly 20 percent of emissions of the heat-trapping gases that cause climate change, said Katharine Hayhoe, a research associate professor in the Department of Geosciences at Texas Tech University. Hayhoe was one of 11 top international climate and forest experts who authored a study released today in the electronic publication of the American Association for the Advancement of Science journal. "Science" has the largest paid circulation of any peer-reviewed general science journal in the world, with an estimated total readership of one million. In this study, the team analyzed how reducing deforestation in developing countries could contribute to the global emission targets required to stabilize atmospheric levels of carbon dioxide. Researchers found cutting deforestation rates in half by mid-century could account for 12 percent of the total emissions reductions needed to safely stabilize atmospheric levels of heat-trapping gases. This would represent an important step towards preventing possible dangerous impacts from global climate change. “Reducing tropical deforestation is key to decreasing global emissions,” Hayhoe said. “The reductions we looked at are projected to cost less than $20 per ton of carbon dioxide. This makes slowing deforestation one of the most cost-effective measures to reduce our emissions globally, especially when compared to the cost of weaning ourselves off our dependence on fossil fuels.” Prior to the Industrial Revolution in the 1850s, the planet’s levels of carbon dioxide, the primary heat-trapping gas released by human activities, was about 280 parts per million. Today, carbon dioxide levels have reached over 385 parts per million, and are continuing to grow at more than 2 parts per million per year. “We could see up to a 6 degree Celsius warming by the end of the century if we don’t take action soon,” she said. “The higher our temperatures warm, the more damage we’re going to see, and the greater the chances of potentially dangerous impacts.” 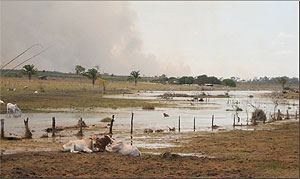 Most deforestation in Amazonia yields unproductive pasture but releases hundreds of tons of CO2. The study shows compensating landowners to keep their land in forests instead could be done at relatively low carbon prices.
The study comes as international climate negotiations are taking place this week in Bonn, Germany. There, policymakers are negotiating the design of international climate policies after the Kyoto Protocol expires in 2012. On the table is a proposal put forward by the governments of Papua New Guinea, Costa Rica and several other forest-rich developing countries who are seeking to reduce their emissions from deforestation in return for access to financing through the global carbon market. “Given the importance of limiting atmospheric carbon dioxide levels to 450 ppm or below, in order to prevent what most scientists view as significant risk to human welfare and the environment,” says Hayhoe, “the U.S. should support the efforts of developing countries as well as take responsibility for reducing our own emissions.” The results of this study emphasize the essential contribution tropical countries can make to the global effort to avert dangerous climate change, said Peter Frumhoff, co-author and director of Science and Policy at the Union of Concerned Scientists. The "Science" paper also follows last week’s Intergovernmental Panel on Climate Change report on climate change solutions. The IPCC concluded that measures to protect and restore tropical forests can be a cost-effective way to reduce emissions while simultaneously creating jobs, conserving biodiversity and watersheds, and alleviating poverty. “For many developing countries, deforestation is their largest source of emissions,” Frumhoff said. “The current negotiations represent a historic opportunity to help developing countries find economically viable alternatives to deforestation, and participate in the global effort to address climate change.” Copies of the paper are available at Science Express.

Katharine Hayhoe, research associate professor, Department of Geosciences, College of Arts and Sciences, can be reached at (806) 392-1900, or katharine.hayhoe@ttu.edu.

Climate Change Warnings Heat up the Star-Telegram
One Texas Tech researcher stays in the news with her research on global warming.

Story produced by the Office of Communications and Marketing, 806-742-2136.
Web layout by Gretchen Pressley