You can’t miss ’em cruising down the street: Lowslung spectacles of eye-popping wonder. Shrieking sunbursts of yellow. Burning bolts of orange. Sleek as a shark’s fin. Cool as the Blues. 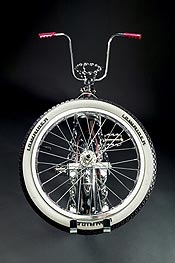 You can’t miss ’em cruising down the street: Lowslung spectacles of eye-popping wonder. Shrieking sunbursts of yellow. Burning bolts of orange. Sleek as a shark’s fin. Cool as the Blues. One thing is instantly clear: These mellow marvels ain’t your daddy’s Schwinn.

These bikes have bling.

Low rider bicycles are much like their big brothers, the better known low rider cars, elaborately painted, finely sculpted and meant to be seen. Texas Tech University doctoral student Kyle McQuilkin first encountered low rider bicycles several years ago while teaching near San Antonio. “The kids would bring their bikes to the parking lot after school,” he says. “The bikes were beautiful, brightly painted and elaborately designed. Others in the school had written these kids off as troublemakers.” McQuilkin’s interest in low rider bikes was rekindled in spring 2004 when he took a Chicano Art History class from Constance Cortez, assistant professor at Texas Tech. The bikes are now the subject of his doctoral dissertation.

Not Your Typical Dissertation

Low rider bicycles as art may not seem a traditional topic for research. But in the Texas Tech School of Art, it doesn’t even raise an eyebrow. The bikes play into debate in the field of art over “visual culture” and the question of just what is art. For Visual and Performing Arts Associate Dean Brian Steele, the bikes fit perfectly into those broader discussions. “One idea is that we need to broaden our definition of art from something that was formulated by 18th century philosophers and instead think more about visual culture,” says Steele. “Kyle’s project taps into new ideas about art and different social groups where the values are not attached just to the bike as an object, but to the clubs and the family involvement that goes into making the bike and the gender issues that surface in the process.” Santana Morin’s bike is a classic example. The bright blue and gold beauty has won dozens of awards across Texas and the nation. It has been a group effort of family and friends to design and construct the bicycle. For Morin, his bike was a way of participating. “I started working on a bike when I was 8 or 9 years old. I enjoy riding around watching everyone looking at you,” says Morin, now 20. “I wanted to be a part of the low rider scene. I’m moving on to cars now, but my bike is still important.”

From McQuilkin’s point of view, the fact that form overcomes function is another interesting facet of the bicycles as art. “Just as low rider cars are meant to be driven low and slow so that they can be seen, so are the bicycles,” says McQuilkin. “The bikes, especially the show bikes, are so low that many of them can no longer be ridden. Santana’s bike is a perfect example. It has been modified to the point that the pedals would drag the ground. In these cases, the theatricality of the bikes is tied directly to the conflict of form versus function.” McQuilkin hit on a successful strategy to find Lubbock kids with low rider bikes. He followed a woman driving a low rider car filled with children until she parked at a flea market. He asked if the children owned bikes. “I’m sure she thought I was crazy, but Amy Zapata and her family turned out to be critical to my research,” says McQuilkin. Zapata and her husband are the leaders of the Tru Riderz car club in Lubbock. And as luck would have it, her children do have bikes. “I wasn’t sure what to think when Kyle approached us,” she says. “I was afraid I had cut him off in traffic. But once he explained what he wanted, I was more than happy to help.” Zapata was McQuilkin’s ticket into the Lubbock low rider scene, a world he found very different than the stereotypes associated with the clubs.

“There is a perception that low riders are gang members and drug dealers,” he says. “But I have found that the car clubs are very much about family and community and friends helping friends. As a matter of fact, many of the club members push their children to build bikes because it’s a way to keep them out of trouble and off the streets.” 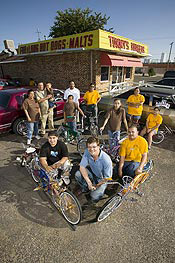 In Lubbock that sense of community means Sunday evening get-togethers at Tommy’s, a North Lubbock drive-in hamburger joint. These gatherings see contests to gauge whose car jumps the highest. Rival car club members check out each others’ rides and often find Amy Zapata wielding a wrench under the hood of a friend’s car making minor repairs. “The low rider community is seen to be male dominated,” says McQuilkin. “My research has shown that women and young girls take an active role. As a matter of fact, the demographics of the low rider clubs very much mirror the demographics of the American family.” McQuilkin’s research has now spawned two exhibits of the bicycles in his department. There’s also a partnership with a local junior high school for a low rider bicycle parade as a companion to the exhibition, as well as interest from other faculty who have had students design their own bicycles. And he has been easily accepted in the clubs. “I think my own aesthetic was constrained by my education,” he says. “I graduated from art school in 1987 when things were slightly different in the art world. I failed to recognize the breadth of possibilities in studying objects such as low rider bicycles. It was thanks to the keen eyes of Dr. Cortez and Dr. Steele that I realized what a broad story there is to tell here.” Amy Zapata just hopes McQuilkin’s research brings much needed, and wanted, positive attention to the bikes and by extension, to the low riders as a whole. And besides, she says, “I want Kyle to make a good grade." 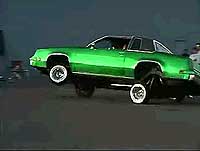